A new event series is set to launch on 30 November in Bologna, Italy. YOKKAO Fight Night will showcase top Muay Thai athletes and the inaugural show will be headlined by the newly-crowned WBC Diamond champion, Singdam who takes on Italian rising star, Cristian Faustino.

Faustino is arguably the most prominent Italian fighter on our promotions at the moment, having taken on headline roles in his last three YOKKAO outings. He went the distance against living legend, Saenchai at YOKKAO 36 earlier this year and put on an acclaimed performance when he faced UK legend, Liam Harrison at the recent YOKKAO 41 in Dublin. Faustino will leave no stone unturned in his quest to the top as he takes on another Muay Thai legend. 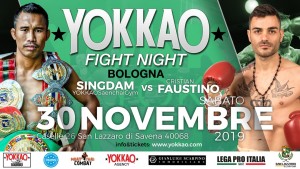 As announced earlier, Spencer has pulled out from YOKKAO Fight Night Bologna due to a suspected traumatic brain injury. The young fighter has ceased all training and is now undergoing further tests and recovery treatment until all symptoms are fully cleared.

Stepping in to face Italian fighter, Alessio D’Angelo in Bologna in place of Spencer will be none other than fellow teammate, Manachai. The former world champion took a hiatus since August and recently returned to the camp where he has resumed his training.

Manachai underwent a tough period over the last few months with the passing of his father. After an impressive run of undefeated performance in the last two years, Manachai took a stumble this year with two losses out of his three fight appearances. With six weeks left to Fight Night, training has picked up at top gear where he will look to make a statement with his anticipated return to the ring.

Manachai joins YOKKAO team mate and multi-time world champion, Singdam on the card with the latter taking on Italian fighter, Cristian Faustino in the main event bout. YOKKAO Fight Night Bologna is the first in a series of events showcasing elite Muay Thai action, and will feature notable Italian athletes for its inaugural show. 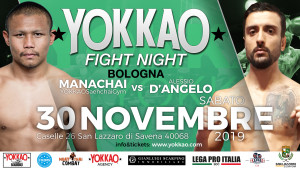