Hello Monika and thank you very much for your time.
How old were you when you first started training martial arts?
I started doing karate when I was 6 years old and when I was 16 I had my first lesson of muay thai.
What excited you about martial arts?
I think martial arts are one of the most difficult sports in the world. Plus you have to be clever and think about what your opponent will do, how you can overcome it. It ´s combat on two levels- physics and your psychic side.
Why exactly did you choose Martial arts?
Honestly I really don´t know why I went to the first lesson of karate. But I completely fell in love with martial arts and I knew that I will be doing it for the rest of my life. 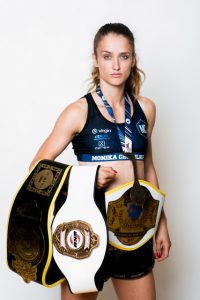 How old were you when you first stepped in the ring?
I was 17, after 1 year of trainings.
You are an inspiration to many young people only starting out in Martial arts. What’s your advice to all young fighters?
Thank you, it means a lot to me. It´s not about talent but this sport is about discipline. So If you want to achieve something go for it 100%, you have to work more than anybody you knows.
Which is the victory in your career that you treasure the most?
That ´s tough one. I had many fights, that meant a lot to me. But I think it was the victory against russian champion Anna Poskrebysheva in semifinals on my first European championship WAKO 2016 in K1. I was a rookie, first time representing my country and nobody believed in me. Technically she was better but I won this fight with my warrior´s heart. By the way any win against russian competitor is a big victory :D. 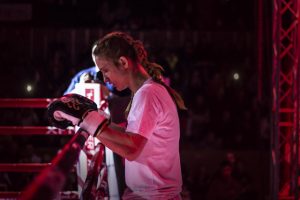 In your opinion, what’s the secret of success in martial arts?
As I said it before, I think it´s the discipline. You can have talent but if you don´t train enough, you won´t be good. Muay thai and K1 are sports, where everybody can find their own advantage. If you are a kicker, you can kick. If you are a boxer, you punch. If you have a good conditioning you push your opponent till he will be tired. A real secret is the discipline and to be prepared to sacrifice the free time, parties, friends and personal life. 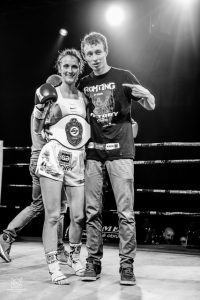 Many people think that martial arts are not a sport at all, but just violence. What is your message to those people?
That´s bullshit. Top athletes figth inteligently.You have to predict your opponent, you have to prepare your tactics. You can´t do it when you are full of agression. You have to have clear head. So this is completely the opposite than violence. You are trying to beat your opponents according the rules. What´s violent about that?
Describe yourself in three words ?
Disciplined, competitive and intelligent. 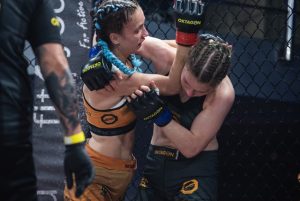 You started a compete also in MMA…why ??
It wasn´t MMA. Organisation Oktagon MMA came out with unique project during corona pandemy. It´s called UNDERGROUND rules, and basically it is muay thai with takedowns in MMA gloves. And why I went under these rules? Because my last fight was in january and I was hungry to fight. So I would take anything to be again in the ring (this time in octagon).
What your opinion on referee trickeries and manipulations?
Well, it´s a tricky question. I think when you fight abroad with a domestic fighter, you have to beat her very hard or KO. When it´s close win, you loose. On the international field of WAKO and IFMA almost every decision is right, but sometimes referees are wrong. After few times referees screw me over I decided to try to finish all my fights KO or RSC, because then, no referee can do you harm.
Which competition do you remember best?
I think it won´t be a positive memory. It´s about my last Enfusion fight night in Slovakia, when I fought for a world Enfusion title. I lost with a very controversial decision, because I won 4 rounds of 5. Everybody including the president of czech muay thai association, organizer of Enfusion, Vinnie Shoreman (Enfusion commentator) and the president of Enfusion Edwin van Os thought that I won the fight clearly. I did everything I could, and I knew I was better and that´s why I felt a big frustration. You do everything right, but still you loose? That´s not fair. And that moment defined my next career. Either I quit or I do more, and few months after I won my first World title in WAKO K1.
How does the Covid 19 situation affect you and how do you deal with it?
We had to close the gym. But fortunatelly my boyfriend is also my trainer, so we trained every day during the pandemy. 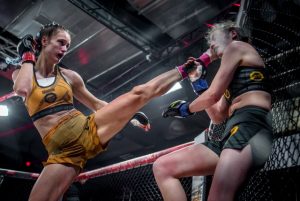 Many have adjusted their training, how did you attune your activities?
Only thing I was missing were my sparring partners. But at least I had my boyfriend so we didn´t hav to adjust anything.
What does this hiatus from competition mean to you?
I was hungry to fight, I missed the stress and all emotions. That´s why I agreed with underground rules.
What is your life motto?
If you want to be the best you have to do for it more than others.
What are your goals and wishes?
First of all I would be very glad to win the gold from IFMA world champioships. And also I want to get to One championship. For me it is currently to most valuable organisation in muay thai and K1.
How do you recharge your batteries?
With many things, but the best charger is my dog. It´s my psychiatrist.
What’s your opinion on the use of prohibited substances in sports?
I despise with these people. It´s not a behavior of a sportsman. The use of prohibited substances are prohibited for a reason.
If you look back, would you change anything or decide otherwise?
Not a thing. Every lost, every win, every injury happens for a reason. 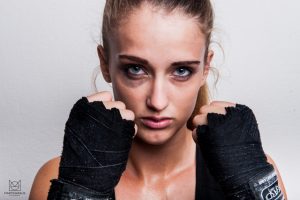 Where do you see yourself in 10 years?
When i will be 34? I will have a big house with 50 abandonned dogs and will spread love everywhere.
What kind of a woman is Monika in private?
First of all I´m devoted and my boyfriend sais I´m caring :D.
What is your favourite food ?
Ohh, currently is Thai food and pancakes.
Perhaps a message for our readers in Slovenia?
I would like to say hello and they should fill their dreams. Never is too late.
Thank you for your time and all the best in future
Milan Krušič 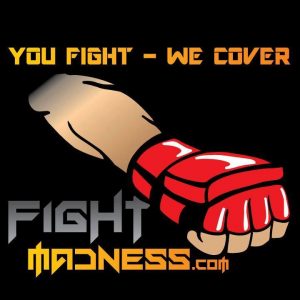