Hello Martina and thank you very much for your time.

How old were you when you first started training martial arts?
I was seven years old when I started to do karate. Five years later they changed the rules and you shouldn´t to touch of opponent´s head and I didn’t like it. So, I started with kickboxing and then Thai boxing also. I just like to fight and I don´t care in which discipline.
What excited you about martial arts?
I loved the movie Bloodsport with Jean Claude van Damme when I was child. I was watching that almost every day and I wanted to be like him.:-) 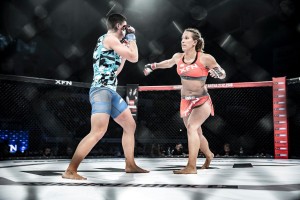 Why exactly did you choose MMA ?
In last two years I lost my motivation in kickboxing. I won many World and European championships and I didn´t move somewhere higher, still the same position and no fights. So, I wanted to finished with everything and just to play my favourite sport tennis… But then I get offer for the MMA fight in my hometown and I said yes I try it! There is too many new things what I can learn and it is so exciting for me. I love that sport now.
You have great results in K1. How do you manage both K1 and MMA?
Now after my first fight in MMA I want to concentrate only for training of MMA. I´m not sure if I will have any next fight in K-1. Maybe the last one…
How old were you when you first stepped in the ring?
I think I was 12 years old when I stepped to the ring in my first time and it was some amateur national cup of kickboxing in discipline of light contact. 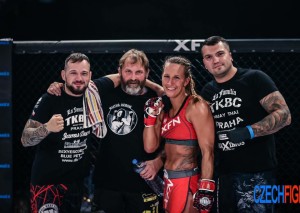 You are an inspiration to many young people only starting outin martial arts. What’s your advice to all young fighters?
To train hard, listen their trainers and believe in them self.
How did you get the nickname MARTINATORKA?
When we were in Thailand, my friend and fighter from Slovakia, Ilja Skondrič called me Martinator Terminator and then just started to called me Martinatorka.:-)
Which is the victory in your career that you treasure the most?
I appreciate all the victories in my career… In June 2017 I fought against Serbian opponent Aleksandra Krstič. This fight was very important for me, home and I wanted to give the victory to my friend and great soccer player František Rajtoral who committed suicide two month before the fight. I won that hard fight for him.
You fought in many big organizations. Where did you feel the best?
Three years ago, I had a rematch against Jorina Baars. It was in California, organization was by Lion Fight where the president is Scott Kent. I liked everything about the fight, it was well organised. 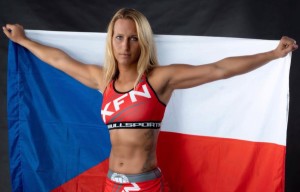 What are your memories of a last victory?
I´m used to winning! Hahaha joke… I had amazing time that weekend. I have too much memories I could write a while novel about it. But one of the best was when my hand was raised and we won!
Slovene Lemmy Krušič helped with preparations for your last fight. How did you meet him?
First time when I meet him was in the summer last year in training camp in ČeskéBudějovice. But we didn´t talk there because I was training kickboxing there and he MMA. One year later I meet him there again and we start to train together. 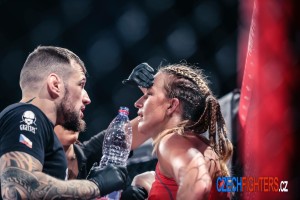 Are you planning on working with Lemmy in the future?
Yes. He loves MMA and he is inspiring me a lot. I like trainings with him too much. He can explain me everything very well and I quickly understand him, even more then to trainers in Czech language. He is the same weight like me so for me that’s great. We can have sparings together also.
You have an impressive score. Do you look for a particular rematch?
I´m not thinking about any rematch. In kickboxing or MuayThai I don´t have a plan to fight now and in MMA I have only one fight so I prefer next new opponents.
In your opinion, what’s the secret of success in martial arts?
There isn´t any secret. Only hard work, believing in yourself and dedication to sport. 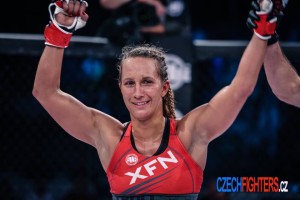 Many people think that martial arts are not a sport at all, but just violence. What is your message to those people?
This people should educate them self. We train hard every day and respect our opponents on the end of the day. It is sport and our life.
Nowadays you fight for XFN. How pleased are you with this partnership?
I´m happy that I get opportunity to fight for XFN. Thank you very much to Petr Kareš and Petr Ondruš. It is the best and the biggest organization in Czech Republic with highly watched events.
Czech Republic has many excellent fighters competing in some of the best organisations. What are the reasons behind this?
A lot of them started to train when they were young. We have a strong kickboxing and Muay Thai scene so a lot of our MMA fighters have strong back ground in standup. If you want to conquer a nation you have to know where are they strong. For example, I started when I was 7 years old and from 12 years old, I competed in kickboxing, then in Muay Thai so switching to MMA isn´t problem for me. I am a universal athlete who is doing a lot of sports, like tennis or football also. So, the moving is my strong side…

Describe yourself in three words?
Positive, likable and determined.
What your opinion on referee trickeries and manipulations?
Unfortunately, this is happening in every sport. It is very sad but what can we do?
Which fight do you remember best?
For my last fight, the premiere in MMA. From that time I got a big motivation for continuation in my dream to be UFC star.
What is your life motto?
I don´t have any motto, I have only moto like a motorbike!  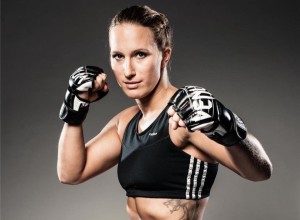 What are your goals and wishes?
I want to be in UFC and fight against the iron woman Cris Cyborg. And I tell you my big dream … I would love, if my most favourite athlete Rafael Nadal would sit there to watching live my fight.:-)
Do you have some more fights in future?
I don´t know when I will fight again but I hope on the began of New Year.
How do you recharge your batteries?
I don´t know this. To many people ask me to how is possible to make so many things in one day. You know, the life isn´t so long, so you have to do everything for 100%. I don´t like a rest, I´m very active girl.
What’s your opinion on the use of prohibited substances in sports?
I am ambassador of clean sport. I never used anything and I had a great results. So just train more and believe in yourself, that´s all.
If you look back, would you change anything or decide otherwise?
Yes. Now I would choose to do different sport.:-) I would play tennis…
Where do you see yourself in 10 years?
Hahaha, in 10 years I´m walking near the beach, in one hand a stoller with my little daughter and before me is running my son.:-)
What kind of a girl is Martina in private?
Eternally laughing girl…:-) I like my life, I love my family, I like to do a lot of fun with my friends and I love a lot of sports.

You travel a lot. Do you have any anecdotes from the road you’d wish to share with us?
I love travelling and I like to know different lives of people then here in Europe, like in Thailand…
What do you do in your free time?
I go to play tennis. Also, I´m a big fan of football team FC Viktoria Pilsen so very often I go to stadium watch the match. I my free time I like to do and watch different sports then the martial arts are.
What is your favourite food?
I like all spicy food and Thailand is the best for it.
Perhaps a message for our readers in Slovenia?
See you soon in Slovenia, standing in the cage with Lemmy in my corner.

Thank you for your time and all the best in future 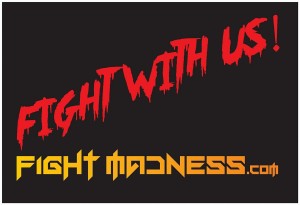