Hello Marcin you have a confirmed title fight at FFC 21 Rijeka. Your opponent is dangerous Tomislav Spahovič. What can we expect from this fight?
Hallo! Im happy I got this fight. Tomislav is a good striker and wrestler. He can be dangerous standing and also on the ground. I prefer standing fight but also I can fight well on the ground. I think that will be explosive and high level fight. Im ready for war doesn’t matter what happen.
Hows going your preparations for the fight?
The trainings going good. I prepare as always hard. Many sweat and blood in the dojo.
Where do you prepare ?
I prepare in Tatsujin Dojo Deventer, Holand by Martijn De Jong.
Your message to Tomislav Spahović is ?
Can’t wait for you in the ring!
When did you start with martial arts ?
I started with martial arts about 15 years ago when I was 12. I started with Karate Kyokushin. Few years ago I wanted to try something else then I begon with mma.
Which is the victory in your career that you treasure the most? What are your goals and wishes?
I think I treasure the most my last fight. Cause that was long, heavy fight and that made me really tired. I had to fight with myself to win.
Goals are changing. My goal is to became FFC champ now. Wishes, I don’t have wishes. I just do what I want archive. If it’s not come easy I do harder.
Describe yourself in three words?
That sounds like job interview. In 3 words will be difficult but I will try. Ambitious, hard work, honest.
What is going on in your head when walking to the ring – are you focused on the fight, is there nervousness and andrenalin?
When I walking to the ring I feel adrenalin. The best when I have clear mind and don’t think. The most time is little bit nervous but in good way of this word. Make me more sharp.
Do you have some more fights in schedule after FFC Rijeka ?
I don’t have any plan after FFC in Rijeka. I will spend some time with my family.
Your message to fans and friends?
Best regards for my fans and friends. I will show you more exiting fights. 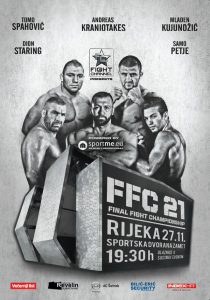 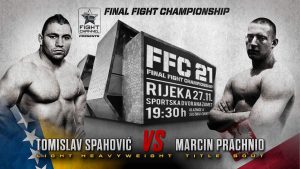