1. Hello Jason, thank you for taking the time for this interview. Let’s begin.
Jason: No problem, thanks for having me.

2.When you were 17 you decided to train K1 instead of soccer. I suppose your brother was an inspiration. Can you tell us more about it?
Jason: Yes, at the time I was playing soccer, but later lost interest in both the team and the club,meanwhile, my brother Jahfarr was training a little bit of kickboxing, just for fun, and that sparked my interest. And I loved sports right from the start. I went down to the local gym with my brother (the Colosseum) to do some training and never looked back.

2. Soon after you started you had your first fight. How do you remember it?
Jason: Oh yes, that was some 3 months after Istarted to train and Ididwell. I was 17 years at the time and I fought someone guy who was 33. My coach asked me“shall we do it”? I was confident enough and accepted the challenge. He always believed in me. It was a good fight. Afterwardsthe coach said that I fight like someone who has fought before. It was a special feeling. Everybody was there, my mother and father, brother and friend came to see the fight.Great memories.
3. You fought in many big organizations. Where did you feel the best?
Jason: Yes,actually every ring feelspretty much the same. I have the same feeling stepping into the ring and the feeling of a victory is always overwhelming. Of course big shows have more media support and consequently offer moremedia exposure. Here the things outside the ring are better prepared. For example, Glory World Series is a good organization; usually they have the best opponents. But as far as fighting goes, it really makes no difference to me, be it smaller or bigger events.
4. We first met at Glory Zagreb, where I was surprised by you being very relaxed and full of positive energy. Do you have a formula you stick by?
Jason: Not really, I try to be myself. I remember you were really nice talking to me. I’m always relaxed when people treat me good, and of course I try to be that nice guy in return. Positive energy is important.
5. What’s your opinion on the use of prohibited substances in sports?
Jason: It’s up to the fighters what they want to do with their bodies. Personally I don’t think it’s going to make your fighter-heart stronger or your chin tougher. That does nothing for me.
6. Do you change your diet when preparing for a fight?
Jason: In the last week or days before the fight I mustn’t eat a lot because I have to cut down weight; not too much though, something like 3/4 kilo. Eating more times a day and eating healthy helps a lot, but in overview it’s nothing special.
7. You have an impressive score – 24 wins of which 12 are tko, but also some loses. Do you look for a particular rematch?
Jason: I believe have like 6 ko’s maybe 1 technical ko… and 5 losses. But no, a fight for me is not something personal. Every fight I go in to win, and that’s that.

8. Which is the victory in your career that you treasure the most?
Jason: That fight is still yet come… but there are a couple of victories that I’m very proud of, like one of the fights in the lower amateurs; I was rocked around, almost going down at one point. My face was very bloody and I remember this voice in my head telling me to go down probably because I was hurting so much. But at the same time Iwas screaming in my head to give everything. In the end I won in the 5th round. Another one is my win in Zagreb; I remember my mother being sick and in the hospital at the time. I won by ko, dedicating the win to my mother. I even cried. I also have fond memories from fighting in Japan. We always dreamed about fighting there, meeting fans and so on. I guess these are the memories I treasure the most.
9. What is your life motto?
Jason: Pray to the lord.
10. Describe yourself in three words?
Jason: Real, emotional,though.
11. Many people think that K1 is not a sport at all, but violence. What is your message to those people?
Jason: Those people should wear gloves and start training. That way they’ll soon find out what kinda of sport this is.
12. How did you get the nickname Tyson and why?
Jason: People in the gym and my trainer always called me Tyson,saying that I punch like Tyson.

13. What are your goals and wishes in K1?
Jason: To be a better fighter and to take my performance to another level,also to make a good life with the sport.

14. You have a confirmed fight at FFC 19 Linz. Your opponent is the local hero David Keclik. What can we expect from this fight?
Jason: This is supposed to be his last fight so guess he’s come strong from the start.But I want to make my name also so I’m also going to come hard too. It’s going to be a war.

16.Your message to David?
Jason: Good luck.
17.You are an inspiration to many young people, only starting out in K1. What’s your advice to all young fighters?
Jason. Never give up, do your best, pray to god. Sometimes the struggle is tough on you but at the end of the day that is what makes you a man.

18. Your message to fans and friends?
Jason: Come see me fight and follow me and my brother. We are what you call REAL FIGHTERS.

19. Thank you Jason, and good luck in Linz.
Jason: Thank you! 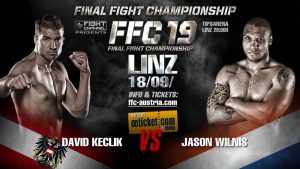