Hello David, for starters, could you introduce yourself to our readers?
My name is David Mitchell.

When did you start with martial arts?
I started Aikido and Kwan Bup at a very young age but didn’t start boxing, MMA, and jiujitsu until I was in my 20’s
Have you always been into martial arts, or were you interested in other sports too?
I liked Bruce Lee and Muhammad Ali but traditional sports like football and basketball were front and center in my consciousness. I wanted to be a pro athlete from the beginning.
How old were you when you first stepped into the ring?
I was 26 years old.
Which victory in your career you treasure the most?
My TKO win over Fernando Gonzalez. I broke his orbital. He told me after the fight that I must return to UFC.

Many people think that martial arts are not a sport at all, but violence. What is your message to those people?

They are right. It’s a legitimate sport but also violence. Therefore it transcends all other sports.
Describe yourself in three words?
Skilled, strong, angry
How did you get the nickname Bulletproof?
I was drinking tons of bulletproof coffee.

What are your goals and wishes?
I want to be the first to hold Eddie Bravo Invitational – EBI and UFC belts at the same time.

Tell us more about your last fight in FFC ?
It was a great experience. The whole trip and fight. The fight itself was a jiujitsu clinic. I’m light-years ahead of the rest of MMA fighter at jiujitsu and finished with my favorite guillotine Choke. #mitchotine

What goes up in your mind when you’re walking into the ring –are you focused on the fight, what is the level of nervousness and adrenalin?

I just trust my training and pray that I can spill his blood and not he mine.
What is your life motto?
I never thought about that. I’ll get back to you.

Everytime I’ve met you in Zagreb you seemed to be in good spirit and full of positive energy. But what is David like when he’s angry and in a foul mood?
I get angry about the success of fighter with shabby ground games witch is almost everyone. And the state of jujitsu and how bad everyone is at it. I guess I’m pretty lame when angry but some of the memes are funny and true.
You own many titles. Which are you most proud of?
I’m the most proud of my FFC title because it’s an international title and I showed my jiujitsu skills were world class while winning it. I consider the FFC 84 kg title the true world title as I’m sure that I would beat the current UFC champ. 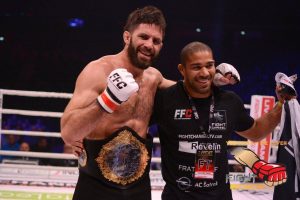 If you look back on your career, would you change anything or decide otherwise?
I would do so many thing different. Of course if I knew what I know now when I was younger I’d be UFC champ but isn’t that true for all of us. Life is just a big learning experience? So I have very few regrets. Mostly a women love I missed and may never get another chance kinda stuff. As far as UFC I believe I still will be the champion.
Where and with whom do you train?
I train at Team Alpha Male with Urijah Faber Fabio Pateta Prado Cody Garbrandt Paige VanZant Dustin Akbari Lance Palmer Cynthia Calvillo and the list goes on and on.

You fought in FFC; what is your opinion of that organisation?
I’ve fought for a dozen different organizations worldwide including UFC and wsof and nothing is even close. My experience with FFC in Zagreb was a once in a lifetime experience. Best city and fight show I ever seen. I was treated like a king. In the past we’ve been treated like cattle.
What impressed you the most about Croatia?
The beauty and sturdiness of the people. Ok you got me. It’s the beautiful women for sure!

Any news on where will you be defending you FFC title?
Not yet but I’m excited to do so. They were discussing Greece and Las Vegas. I’d rather go to Greece where our sport began at the first olympics but Las Vegas is the current capitol of MMA so I’d love to fight there again as well.
Do you have any fights booked for near future, and where?
Fight To Win Promotions in San Jose on January 27th #jiujitsu rules. It will be live on FloGrappling so it can be seen worldwide on the web. It’s also the most stacked jiujitsu show I’ve been a part of and I fight for another title so it very exciting. Then I just signed up for ADCC west coast trails April 15th. But I have no MMA fight scheduled.
Opponents are often switched in the last moment before the fight. Does that bother you, or you just don’t care?
I don’t care. I am the best fighter at 185 in the world right now. So I alway hope it’s someone good. But no one good wants to lose to me so it is hard to get tough fights. In jiujitsu I’m currently being ducked by everyone.

Where do you see yourself in 10 years?
As crazy as it sounds I hope to still be competing MMA and jiujitsu and defending the UFC and EBI title as the oldest champion ever. My body feels better everyday and feel I’m just at the beginning of greatness. I might also do seminars and teach but right now I only l show my secret jiujitsu to a select few people.
What kind of a man is David in private?
In private I’m funny but also like to get deep. I’m primarily a loner spending a lot of time meditating and reading and watching and thinking about jiujitsu.

I noticed your wish to return to UFC. In stand up fights you are a master. Where do your advantages lie in your opinion?
I’m a master of ground fighting actually.
Which fight do you remember best?
My first fight July 8, 2006 at Deep Impact GC 52. And UFC Tito vs Chuck MY INSIRATION and still #goat Chuck Leddell.
What do you do in your free time?
I like to get out in nature. Jump in cold rivers and oceans and build hot fires and camp out. I do a lot of breathing and movement stuff like Rickson Gracie used to do.

What is your favourite food?
Eggs and bacon with kale. And peanut butter of coarse.
Before signing of, can you share with us an anecdote from the world of martial arts?
Every man dies, but not every man really lives.
Your message to fans and friends?
Thank you friends, family, fans, and even haters. You inspire me to reach new heights. Special thanks to Fabio Prado and Justin Buchholz and Joey Rodriguez for being the best coaches a fighter could have.
Thank you for your time and all the best in future